Avian Trichomoniasis: A Disease that is for the Birds

Last night I got home from the 46th annual Southwestern Association of Parasitologists' meeting.  I spent Thursday night, all day Friday, and Saturday morning immersed in conversations about parasitism among other exciting topics.  My little notebook is clutter with little thoughts that popped up during the numerous and exciting presentations given by everyone from undergraduates through tenured professors.  When I sat down to create a post for today, I had a hard time deciding which topic to pick!  Then I remembered that I will be able to post on everything I learned in good time. One thing that was barely touched upon sparked my interest.  Rather than posting about something I learned a lot about (you know, the logical thing to do) I decided to post about something I had to do a little research about.  This wasn't the first time I've ever encountered Trichomonas gallinae, in fact, I mentioned it once in a blog about dinosaur parasites.  But I've never written anything else about it, and I would like to change that. So, here it is, a blog post about something that was barely mentioned and scarcely discussed at a meeting full of parasitophiliacs, just because I can. 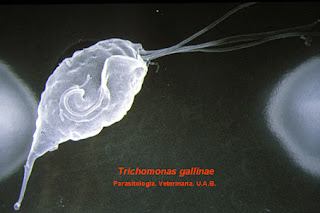 Trichomonas gallinae is not a human parasite.  This parasite instead infects a variety of birds.  It is most often found in columbids (doves and pigeons) but has also been known to infect chickens (no wonder with an epithet like "gallinae"...the scientific name for a chicken is Gallus gallus), turkeys (which are in the same order as chickens...the order galliformes), and a variety of raptors (birds of prey like hawks and eagles).  As late as 2005, reports of the disease were coming out about new bird host species.  The disease is widespread and, as you may have already guessed, very much not host-specific.  But before we go any further, let us look at this protist's taxonomic status.

Taxonomy
Like all protists, this organism is a eukaryote, separate from bacteria and archaea by the presence of true, membrane-bound organelles.  There are many debates about upper taxonomy, so to avoid doling out information that is not up to date, let us skip to the class level.  This organism is placed within class Parabasalia, which is thought to be one of the oldest classes of protozoans. These primitive, unicellular organisms lack mitochondria and function anaerobically.  Parabasalids are characterized by the presence of one or more clusters of flagella emerging from the anterior end of the cell.  They are named for the parabasal fibers that run between basal bodies and Golgi complexes within the cell  There are 10 orders within this class, most of which are known to live within the guts of insects (both as parasites and as symbiotic mutualists). They are further placed within the order Trichomonadida based on their morphological characters.  Member of this order usually have 4-6 flagella with one being "recurrent", meaning that one runs the length of the cell and presents much like an undulating membrane.  Those within this group that are parasites (and not all of them are) never form a cyst stage.  Instead they remain in mobile feeding stages known as "trophozoites".  Because they do not usually form a cyst stage, the major means of transmission is via direct contact. This protist belongs in the family Trichomonadidae under the type genus Trichomonas.  Members of this genus exclusively parasitize vertebrates, but non-parasitic members can be found as endosymbionts within the guts of termites. One member of this genus, T. vaginalis, parasitizes humans and is spread through sexual contact.

Life Cycle
Trichomonas gallinae has a relatively simple life cycle compared to say, most parasitic helminths.  But that doesn't make it uninteresting.  These parasites are typically found at the anterior ends of the digestive and respiratory tracts of birds or in the oral-nasal cavity of such animals.  These organisms are able to reproduce quickly via binary fission while inside a suitable host.  Again, these organisms do not form cysts, so they often die rather soon after expulsion from a host.  They move from one host to another in one of three ways: 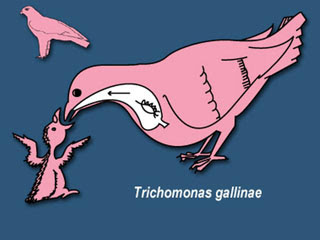 1) As a parent bird regurgitates food or crop milk (a secretion produced by pigeons, doves, flamingos, and some penguins that includes partial sloughs of the lining from the crop and contains a great deal of protein, fats, anti-oxidants, and immune supplements including antibodies and digestive bacteria) to feed their young, the parasite can get picked up as the food passes through the upper digestive tract and/or oral cavity and transferred to the young upon ingestion. This is the main source of transmission among doves and pigeons, which could be why the parasite is so prevalent in these types of birds.  Adult birds may carry the disease asymptomatically for years...spreading the disease to their offspring long before manifesting clinical signs of infection.

2) Trophozoites can survive for a short time in water, where an uninfected host may pick up the parasite through drinking. This means of transmission is highly problematic for domesticated chickens and turkeys that drink from water or ingest food that may be contaminated with feces, saliva, or a variety of secretions coming from the crop.  Wild birds have been known as sources of infection among domestic birds, but domestic birds keep the transmission cycle going within their own flocks through this form of transmission.

3) An uninfected bird may eat an infected bird and acquire the infection in this manner. This is an especially common means of infection for birds of prey, for reasons I'm sure you can imagine.

Avian Trichomoniasis
This disease is typically found in young birds and can be found in a wide variety of virulence patterns.  Adult birds that have been infected and have recovered carry the parasite, but become resistant to reinfection.  Because of the dynamic virulence of these parasites, the rates of birds infected are not closely linked to mortality rates.  Sometimes infections are mild or even asymptomatic for years.  Other times, the disease can result in death a mere 4-18 days after infection. 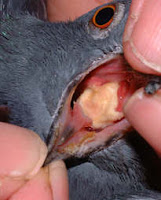 The disease presents as lesions within the mouth cavity that appear white or light yellow.  The lesions result in mucosal inflammation and ulcerations that expand into the esophagus, proventriculus, and crop.  As the disease progresses, the lesions create masses of dead (necrotic) tissue that may block the passage of food and/or air.  This may cause so much pain that the birds no longer wants to eat and suffers from subsequent starvation, or it may cause emaciation or asphyxiation as the esophagus and trachea become obstructed.  In rare instances, other organs such as the liver, or the eyes can become infected and will manifest such lesions to cause organ failure.


Diagnosis, Treatment, and Prevention
Avian trichomoniasis may be diagnosed based on clinical signs such as difficulty swallowing, inflamed mucosa, and excessive salivation or by direct observation of characteristic lesions/nodules within the mouth.  The only way to confirm infection is to demonstrate the organisms microscopically from samples of fluids, nodules, or lesions.

The most efficient treatment is the administration of antiprotozoal drugs like dimetridazole or metronidazole.  Birds typically recover in as little as 1-2 days after administering such drugs.  Sometimes, oral plaques have to be removed manually using forceps before drug administration.

For domesticated birds, the best form of prevention is regular cleanings of feeders and water sources.  It is also important to try to reduce contact with wild birds that may transmit the disease or at the very least protect food and water sources from wild birds.

The spread among wild birds can be reduced by regularly cleaning wild bird feeders and bird baths, allowing adequate drying time for both before refilling them with food or water. These parasites have never been known to infect humans, but in the interest of safety from other type of avian zoonoses, it's a good idea to wear gloves when completing such chores.

Moral of the Story
First of all, writing this post taught me that just because something is grazed over at a meeting of people who love parasites doesn't make it any less significant or interesting than any other parasite. From doing the actual research itself, it is important to know about such things if you ever plan to raise domestic birds as pets or sources of meat/eggs/feathers.  It is equally important to know these things if you are a wild bird enthusiast with a backyard of bird feeders and stone baths for inviting your winged friends to join you for a mint julep on a nice, sunny afternoon.  So, keep your bird-areas clean as best you can and hope for mild cases for the birds beyond your treatment/prevention capabilities. 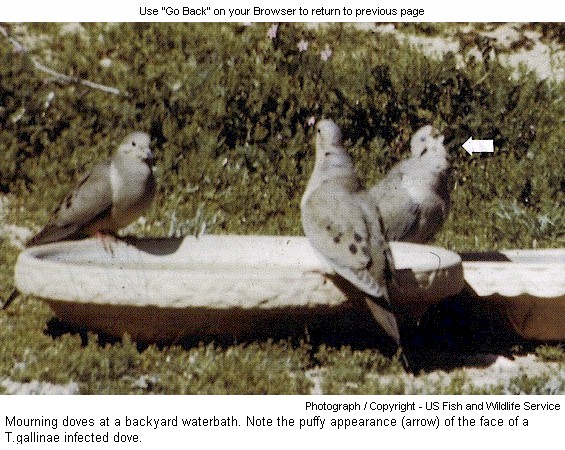 Posted by JJ_Parasitophiliac at 3:27 PM

JJ_Parasitophiliac
I'm a person with many interests and hobbies. I enjoy making things and finding new ways to save money. I'm fascinated by parasites. I love my husband, my job/schoolwork, and my life in general. I'm an avid philomath and bibliophile.